And off we go. We met shortly before 8 am in Karloveská shipyard from where we went to the Vienna port by car. As usual, the biggest problem was to pack up for the ship. When it seems you have a lot of free storage space, you have probably forgotten something. The last time I forgot my tent, sleeping bag, sleeping pad and also shoes. A majority of packed things always stays unpacked, so it was not so disastrous. The stairs led directly to the water so the boarding was pleasant. 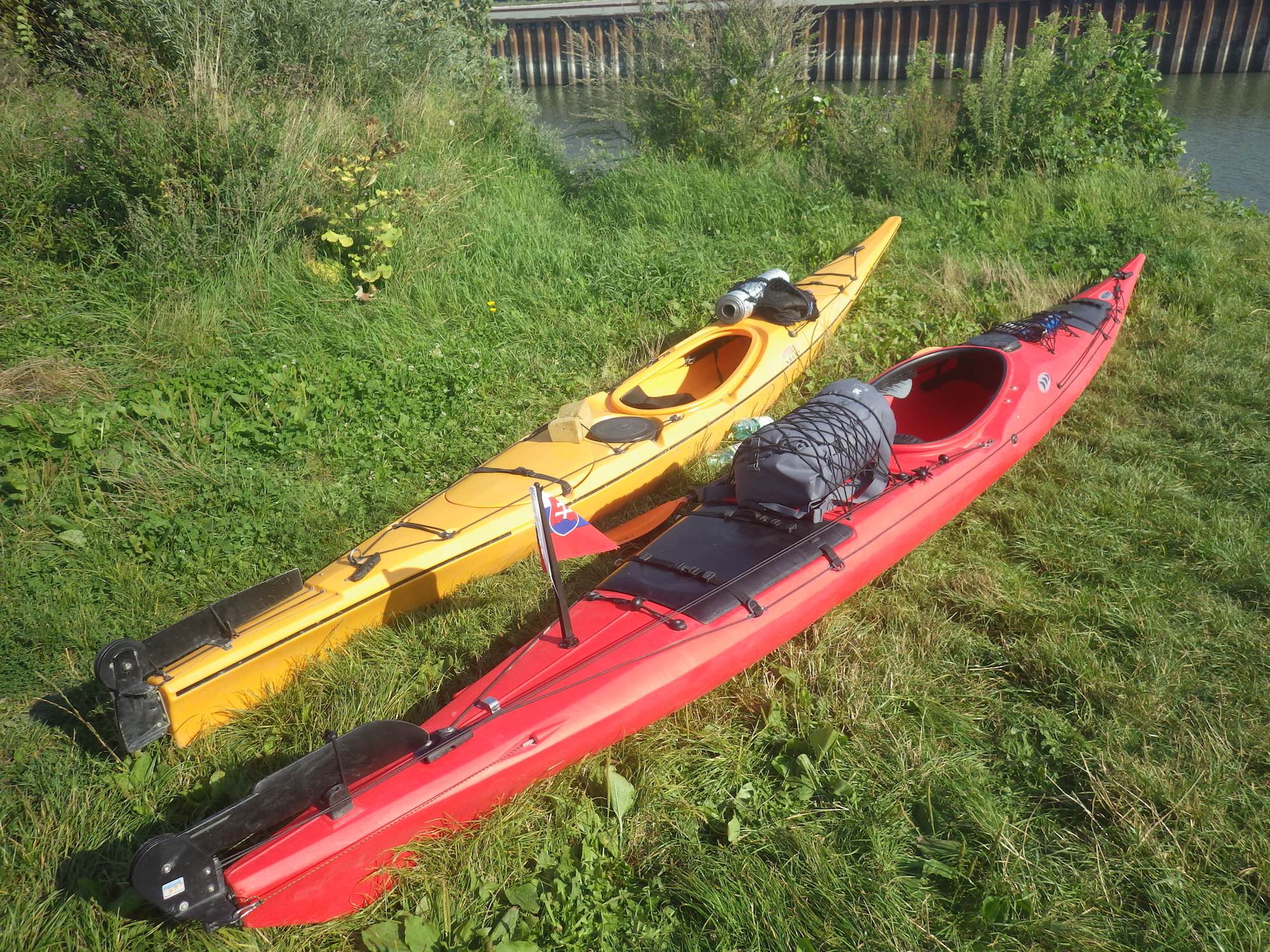 I took a photo of the port and we started our long journey. 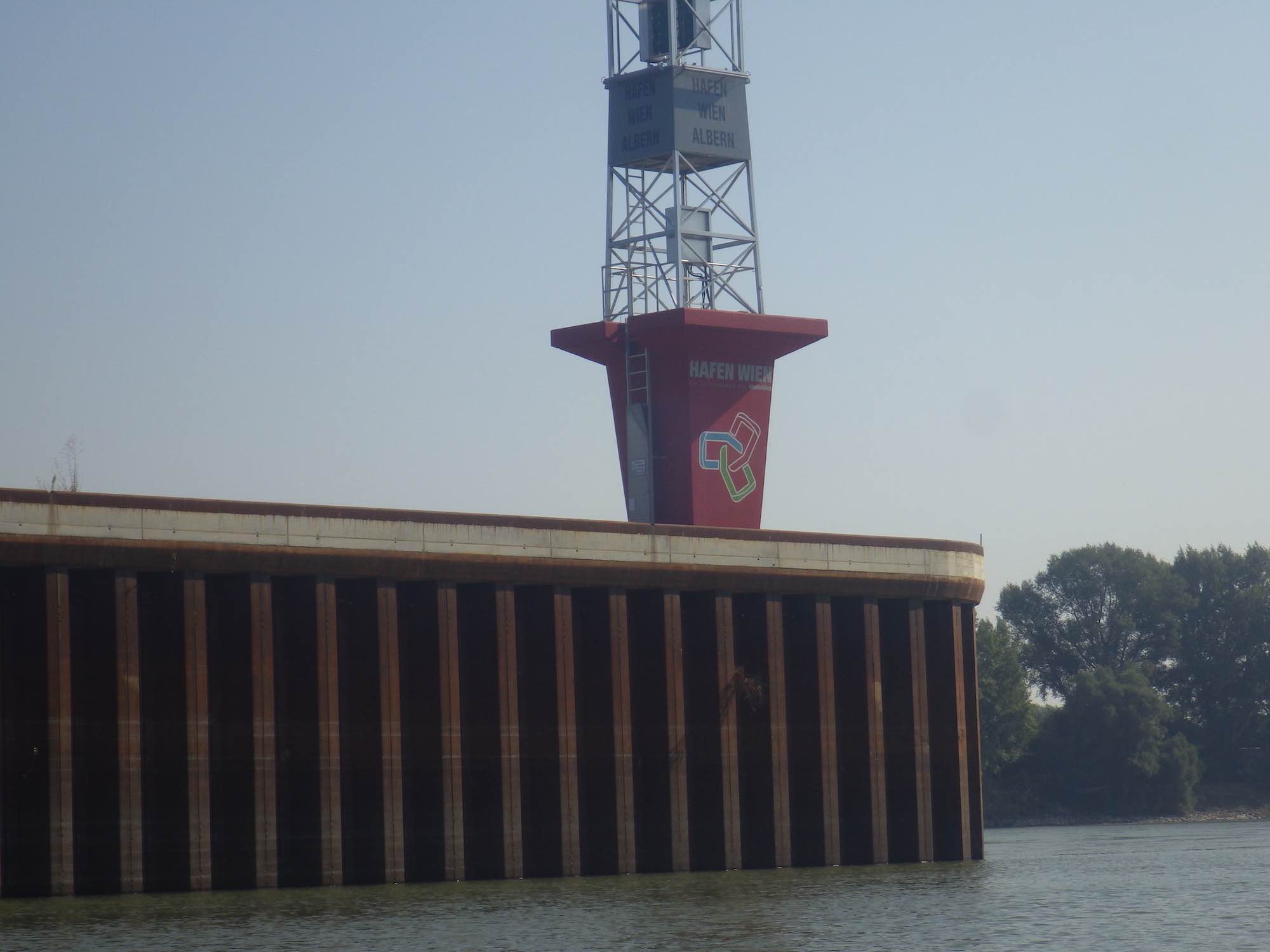 It was very windy from the morning so paddling was very exhausting. Although we did not feel it, it was very hot and in combination with the wind our skin was very dry and we were always thirsty. 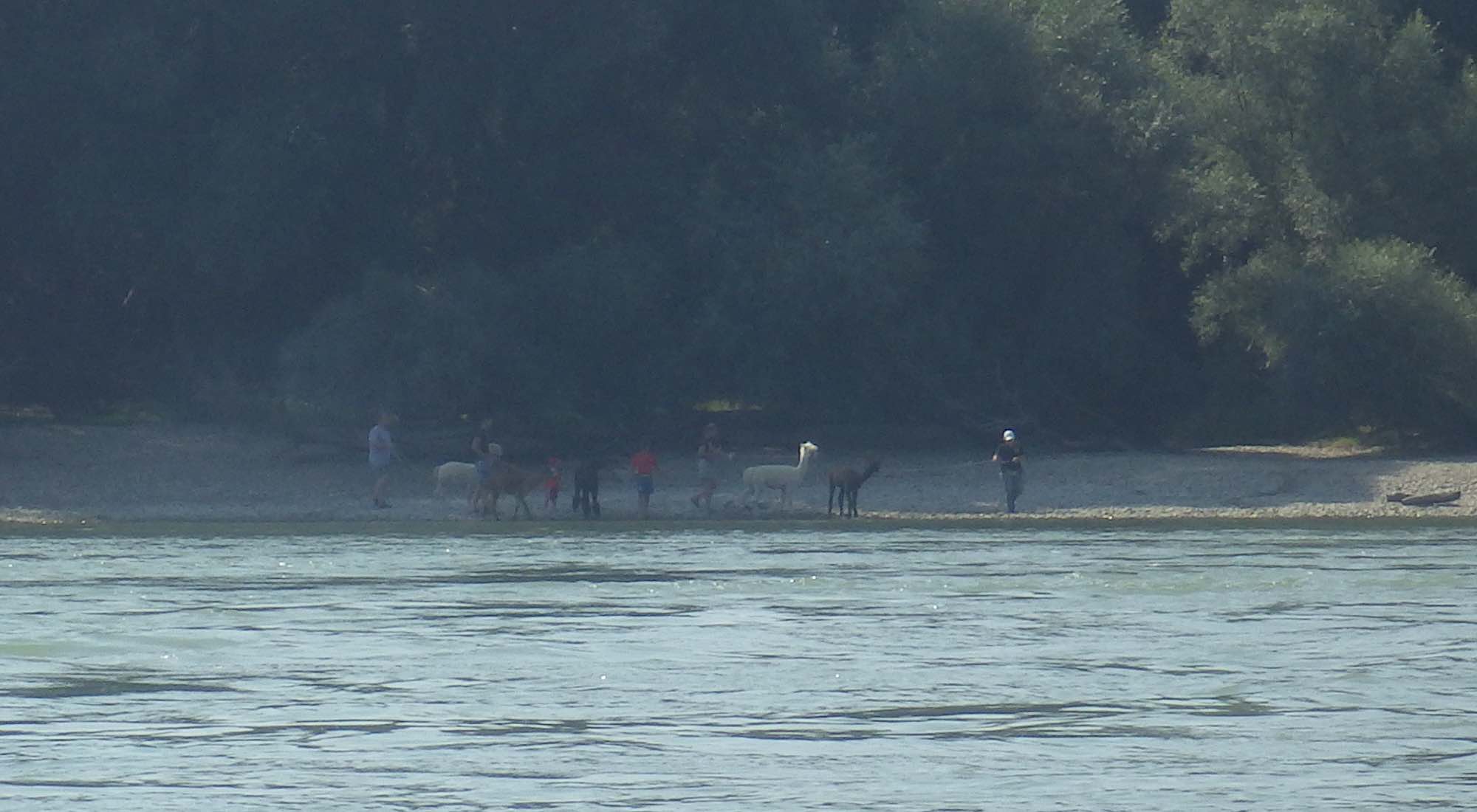 We met not only a lot of nudists on the Austrian Danube, but also a family walking a herd of llamas. 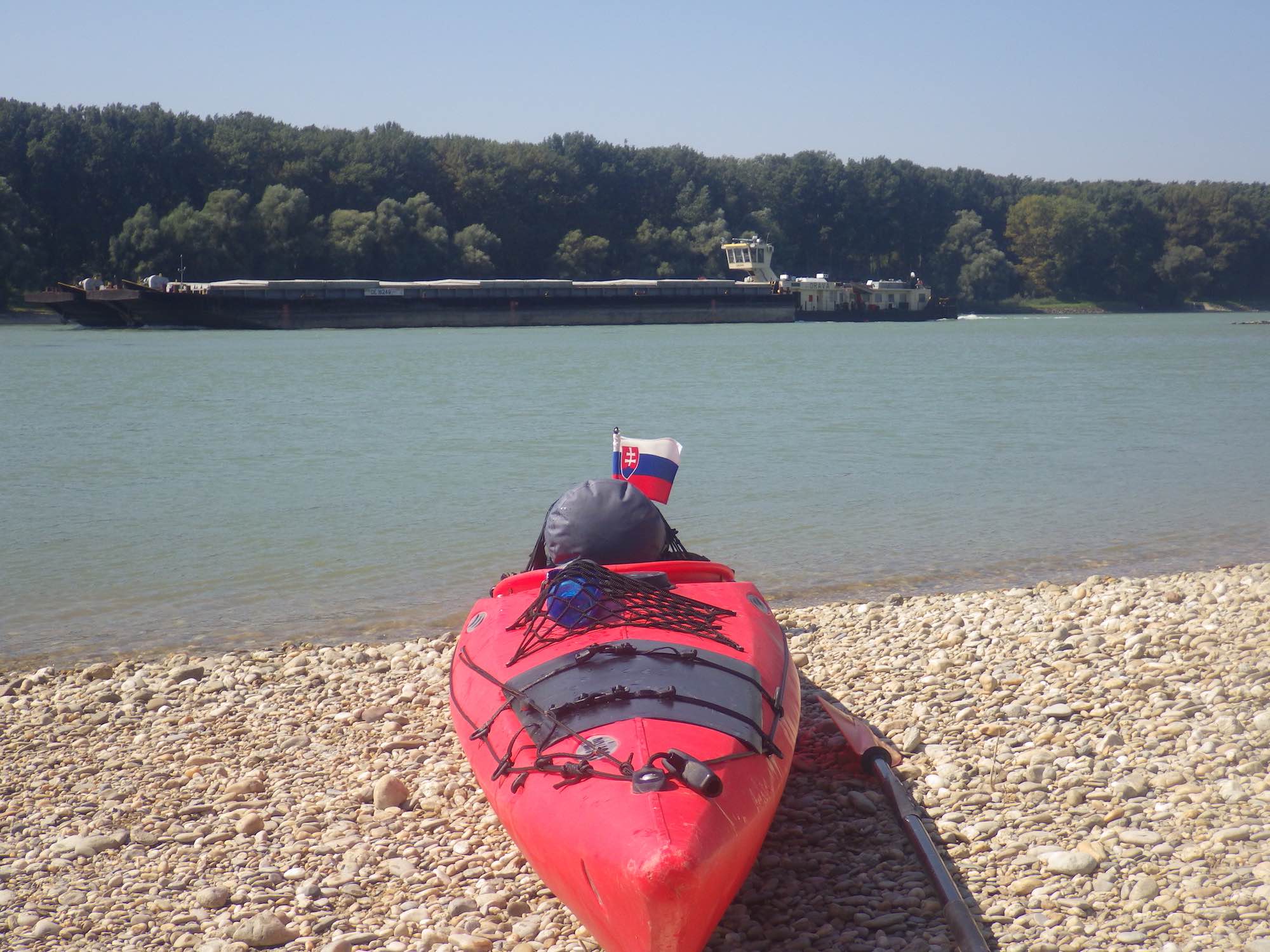 At about 1 pm we stopped by on a gravel island where we cooked lunch. It was very windy and my gas cooker did not want to work so we had to cook couscous in a nearby forest. I had a Slovak flag on my boat which caused that a married couple greeted us “Dobré ráno!”, which means “Good morning” in the Slovak language. It was afternoon but it was very pleasant to hear our language abroad. 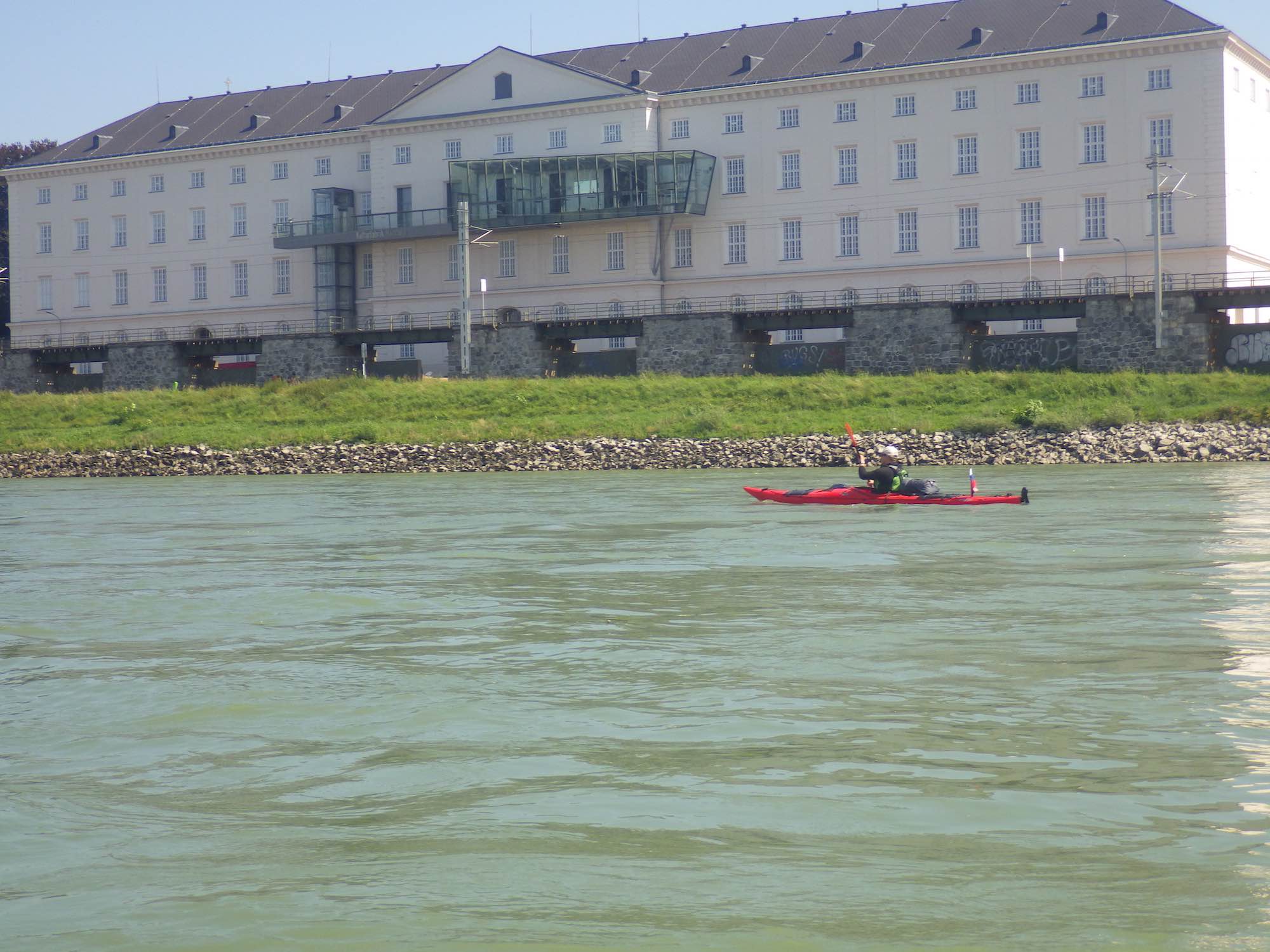 Hainburg signalised we were approaching Slovakia. 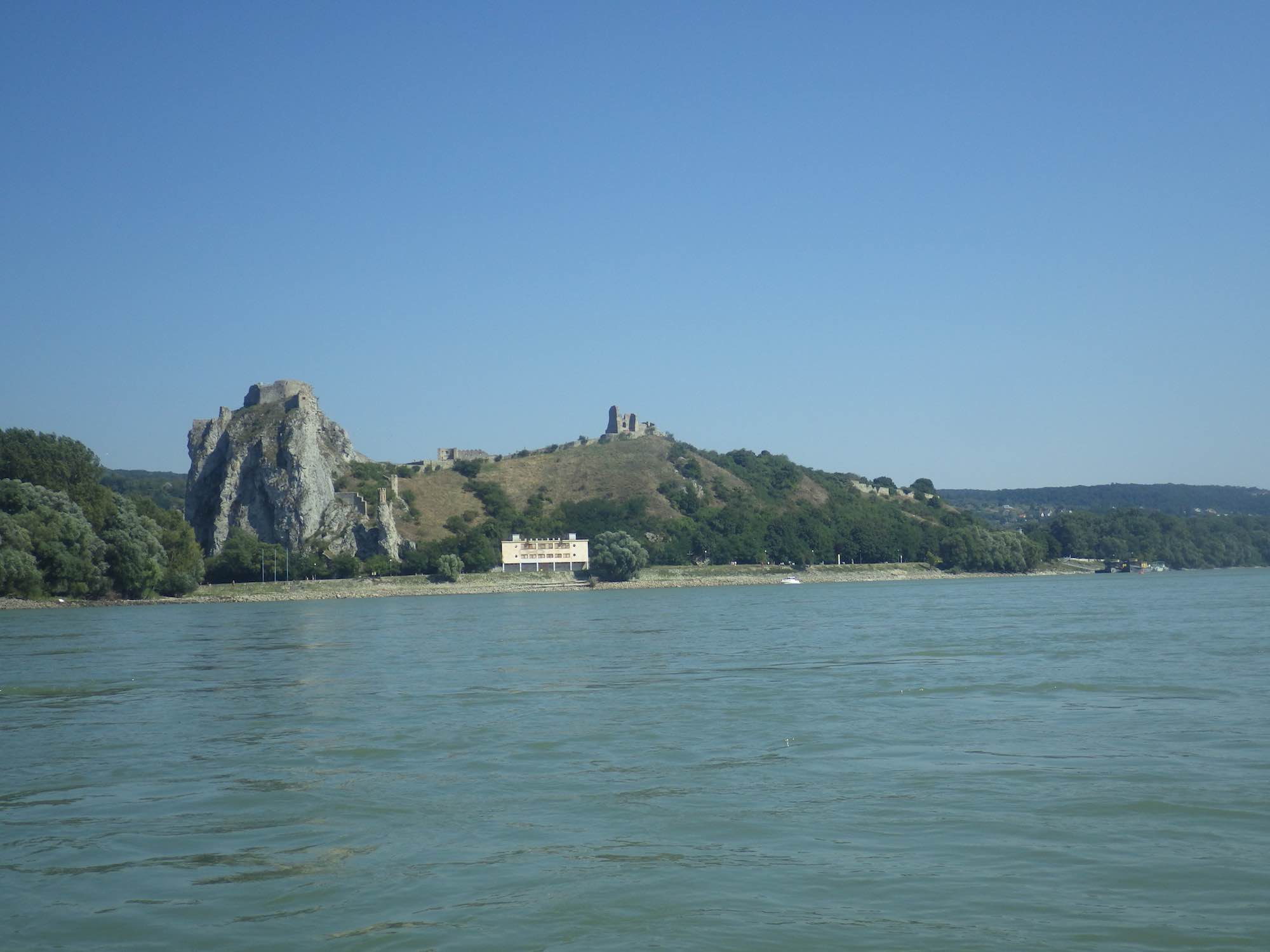 Ruins of the Devín castle

Like many times before - I thought how to take a photo of Devín castle, but every time the photo was degraded by an ugly concrete building in the center. I read it had been a nature theater which was built by the German minister of propaganda Joseph Göbbels as one of the tools for propaganda. Google told me people wanted to destroy it. I am in favour. 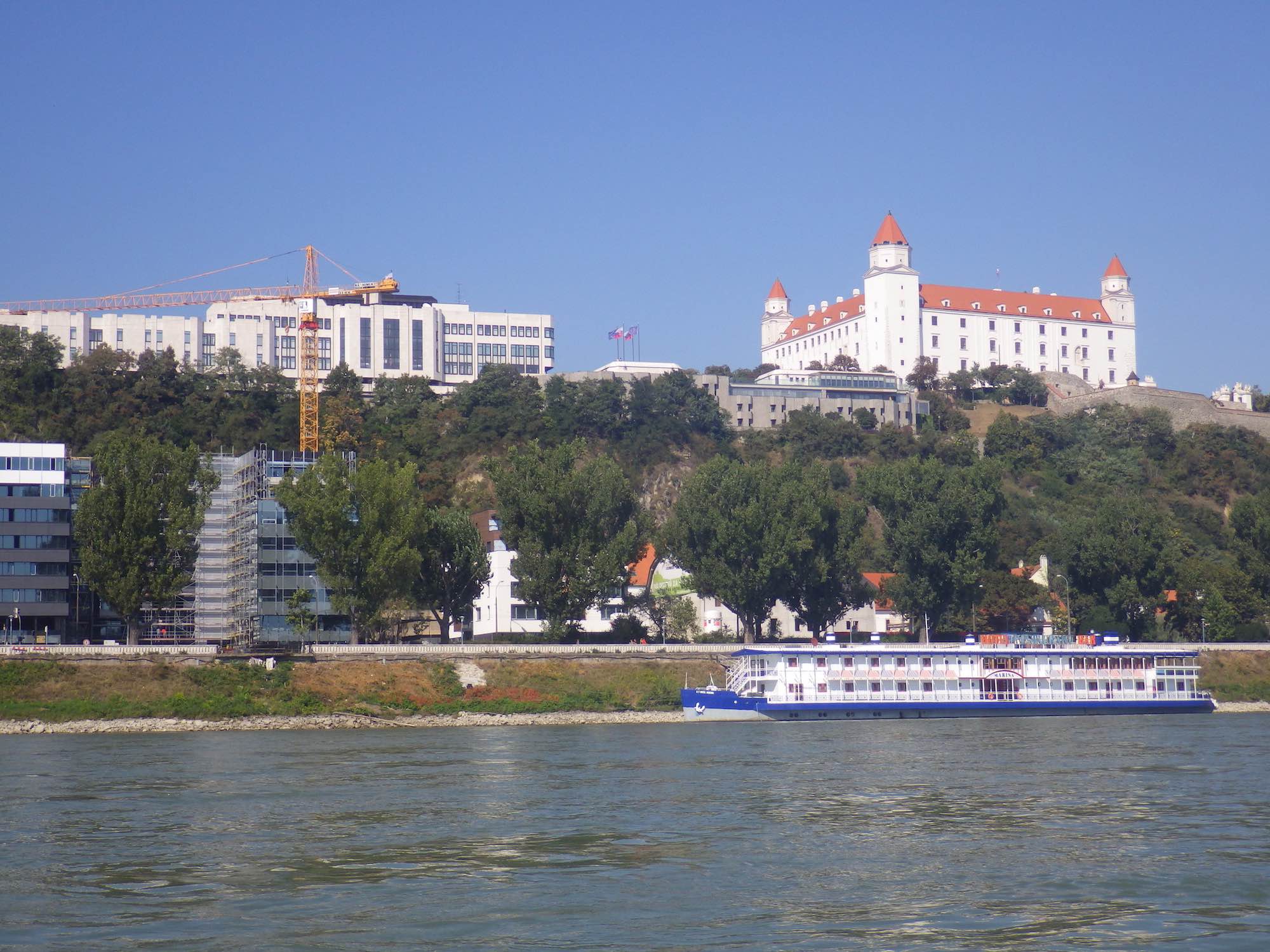 Bratislava looks completely different from water. The atmosphere of the city is the same, though. 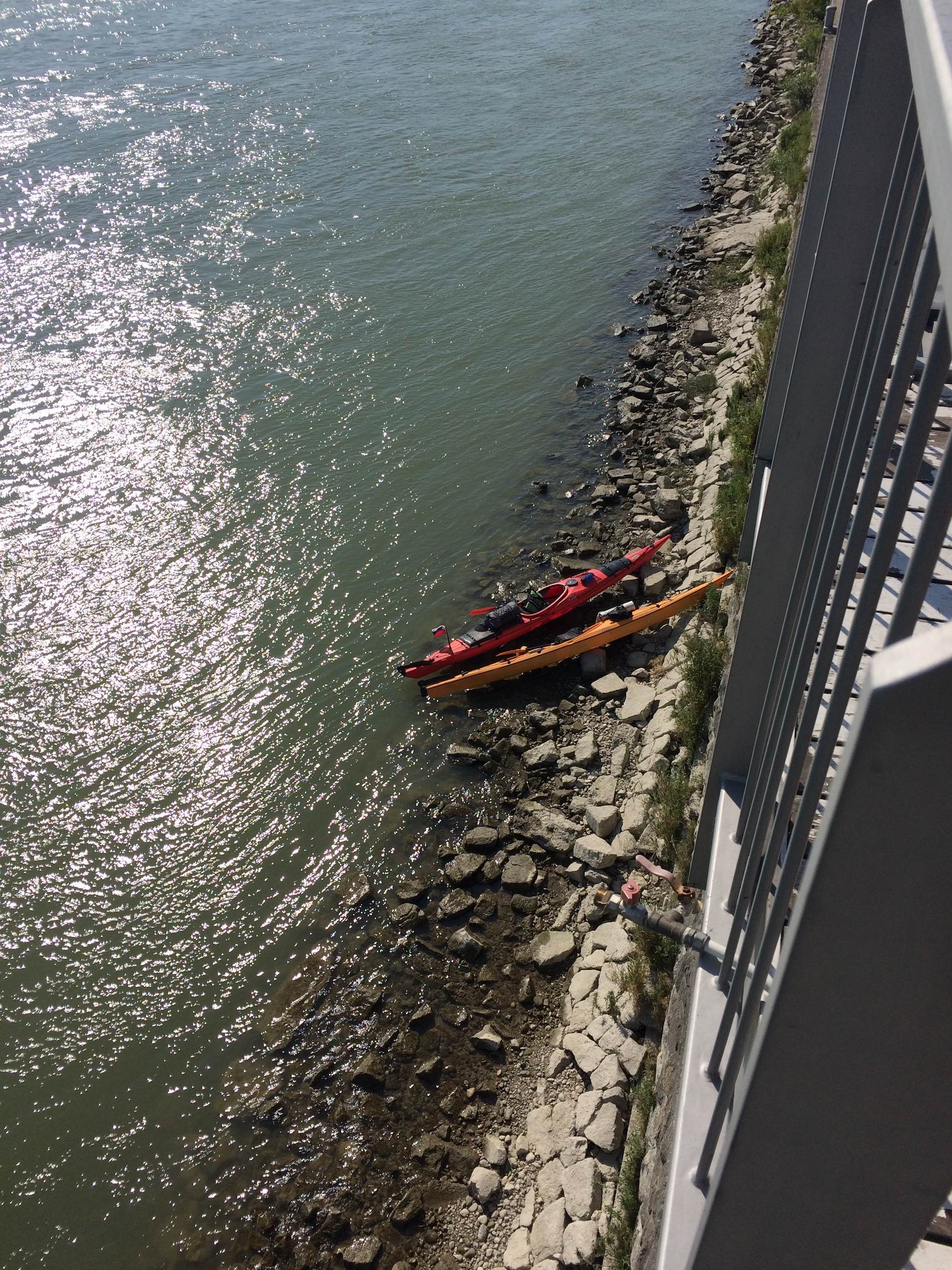 We made a short coffee break in the shopping center Eurovea. When the river level is low you can easily get out of water, climb the stone shore with help of a little stair. We were able to see the kayaks from the terrace of Japanese restaurant Sajado. It was important because it was impossible to tie the boats and there were waves from big ships. We didn’t want to lose our kayaks in the Danube river. 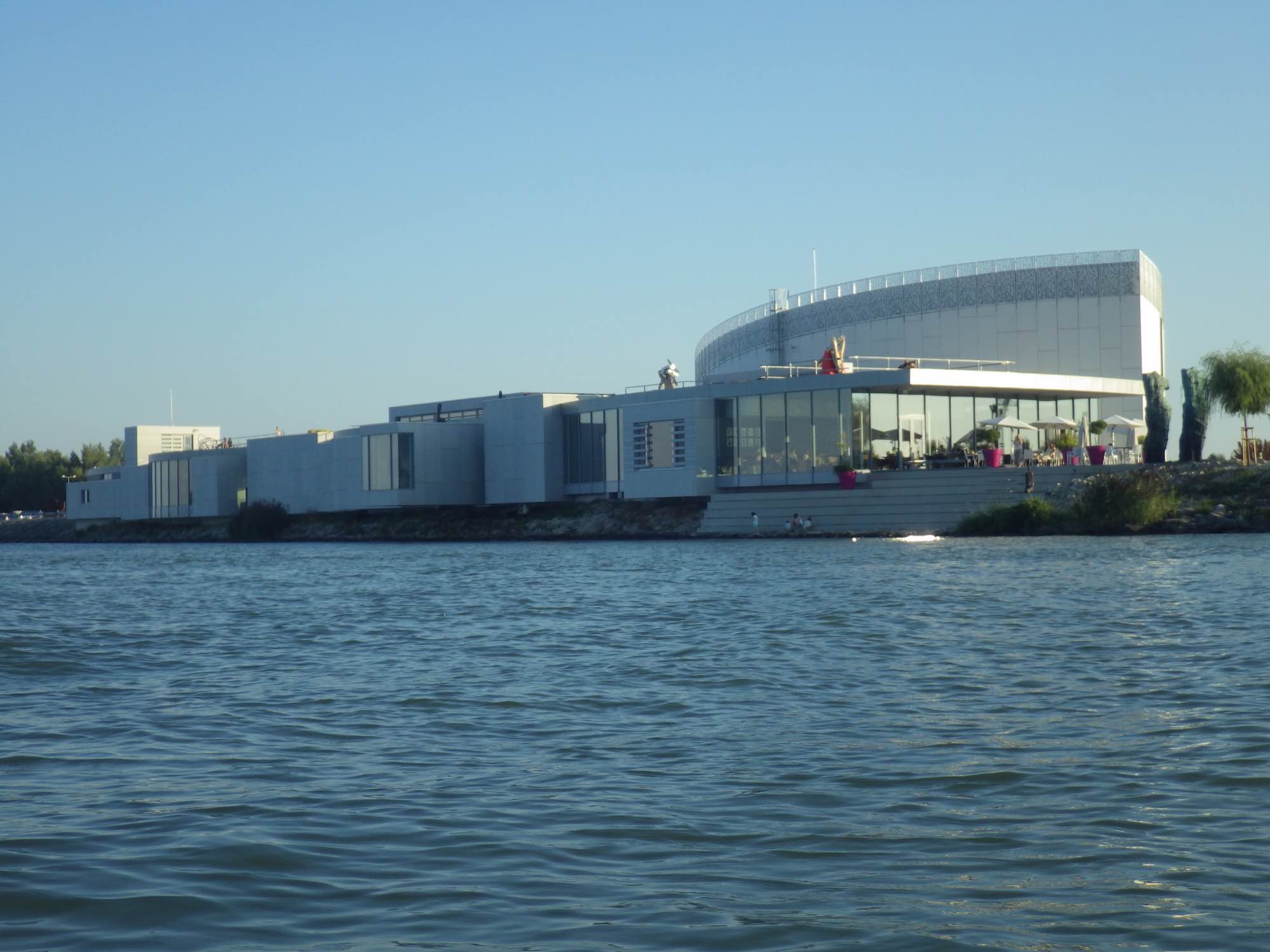 In Čuňovo waves were expecting us. I managed to break only every other wave so I took some water to kayak. Our spraydecks were stored on a safe place - in cargo space and we were too lazy to pull them out. 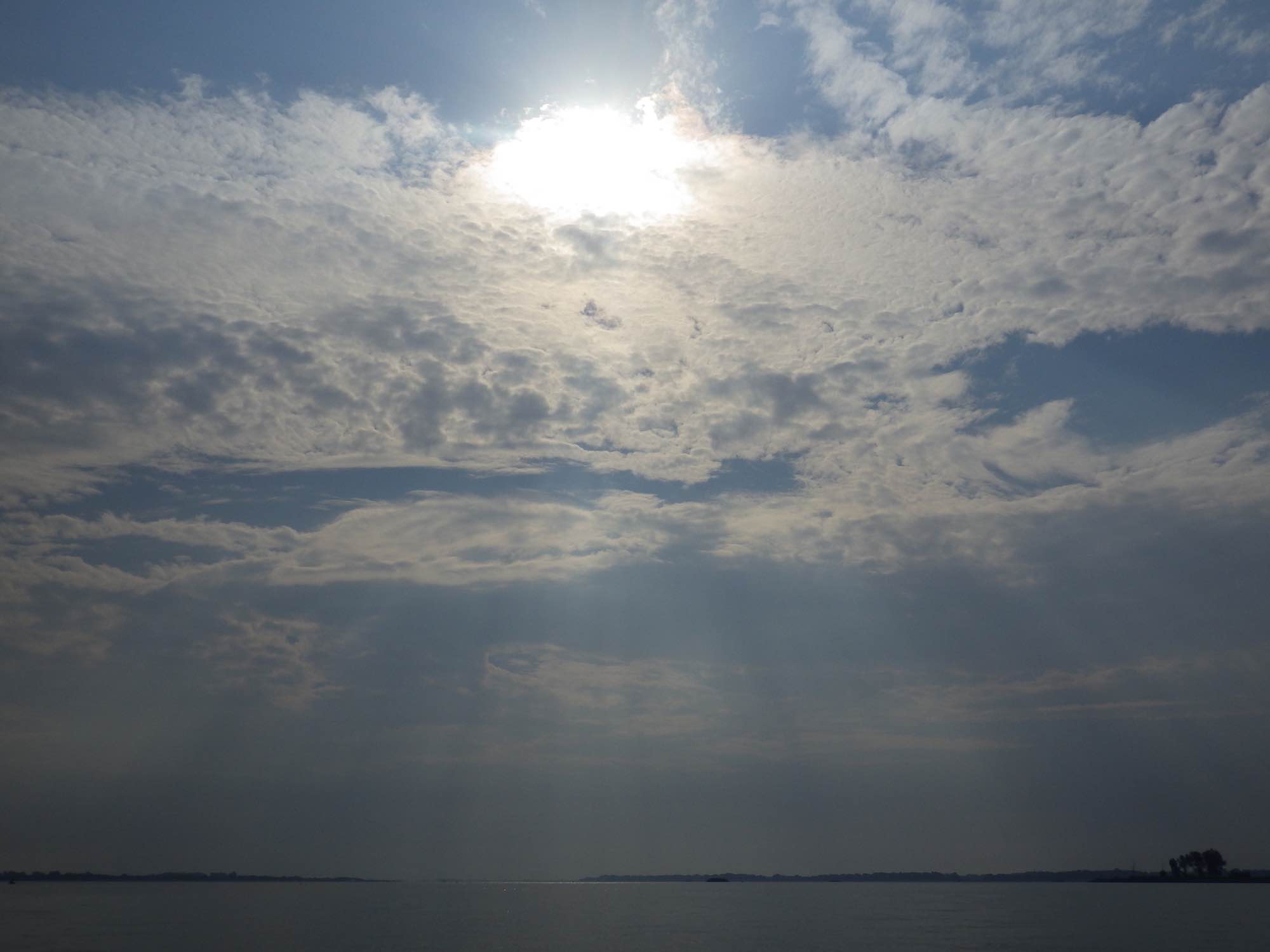 It was very nice here. There were hundreds of water birds. Swans, herons, gulls, ducks, etc. It was a place where I would spend whole day but the time played against us. The sunset was close and we were still more than 10 km away from the planned campground. Not only did the waves convince us to stay at the nearest suitable place but also the fact that we did not know what to expect while transferring our kayaks to the old riverbed of Danube. 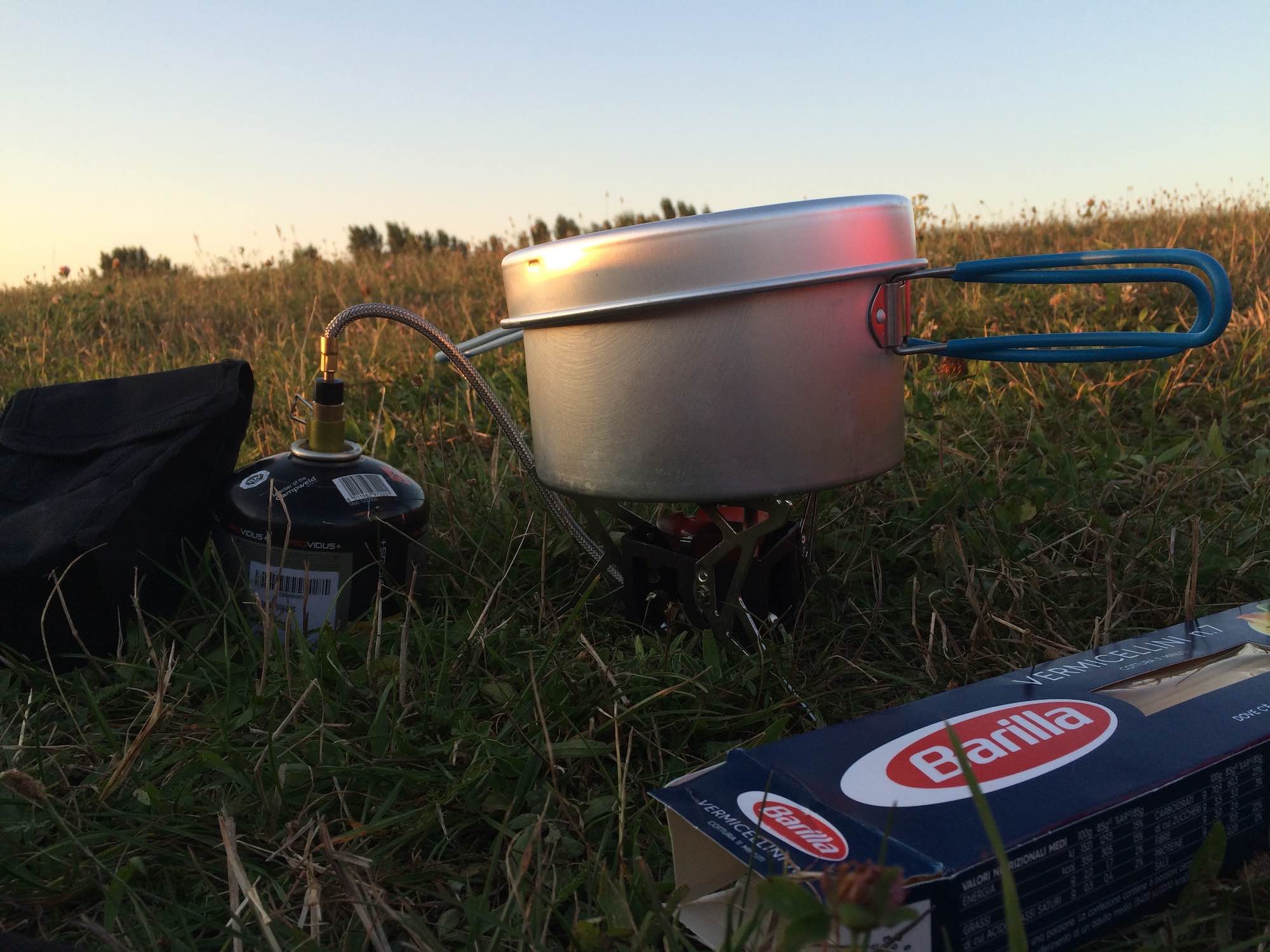 It reminded me of the beach in Hamuliakovo where we went for a walk last year. We just traversed to the left the side of the flume. Getting out of water was unpleasant because of a stupid man on a water scooter. He was doing dangerous maneuvers near us. When we talked about his stupidity he turned back. He was going reverse and did not see where he was going. In our close vicinity there was an outdoor party with people singing interesting songs. They stopped at about midnight. As usual, I slept in the open air and counted fallen stars. 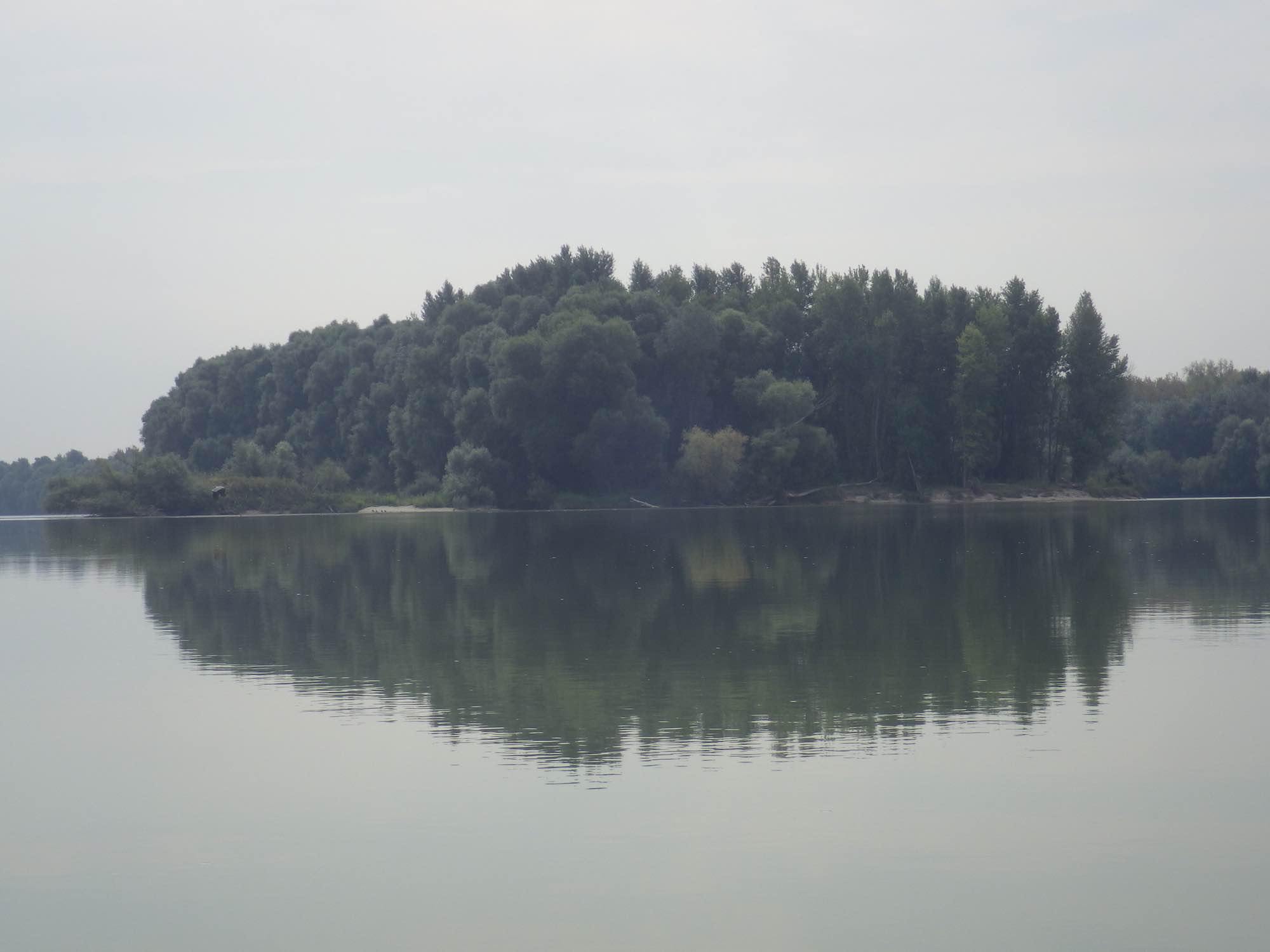 In the morning we talked about how we would compensate the distance loss from the previous day. Firstly, we needed to transfer the boats. We knew it was somewhere in front of the 1942 river kilometer on the right shore. It was about a 200 meters long transfer which started with huge stairs up and down to overcome the dam. Then we crossed the road and via panel road we got directly to the water. It would be really beneficial to have transport wheels here. Despite having felt a bit relieved, our conversations were about our struggling. I suggested we stop talking about that. :) Soon we came to the ferry and so I knew we were approaching the confluence of the old Danube and flume. 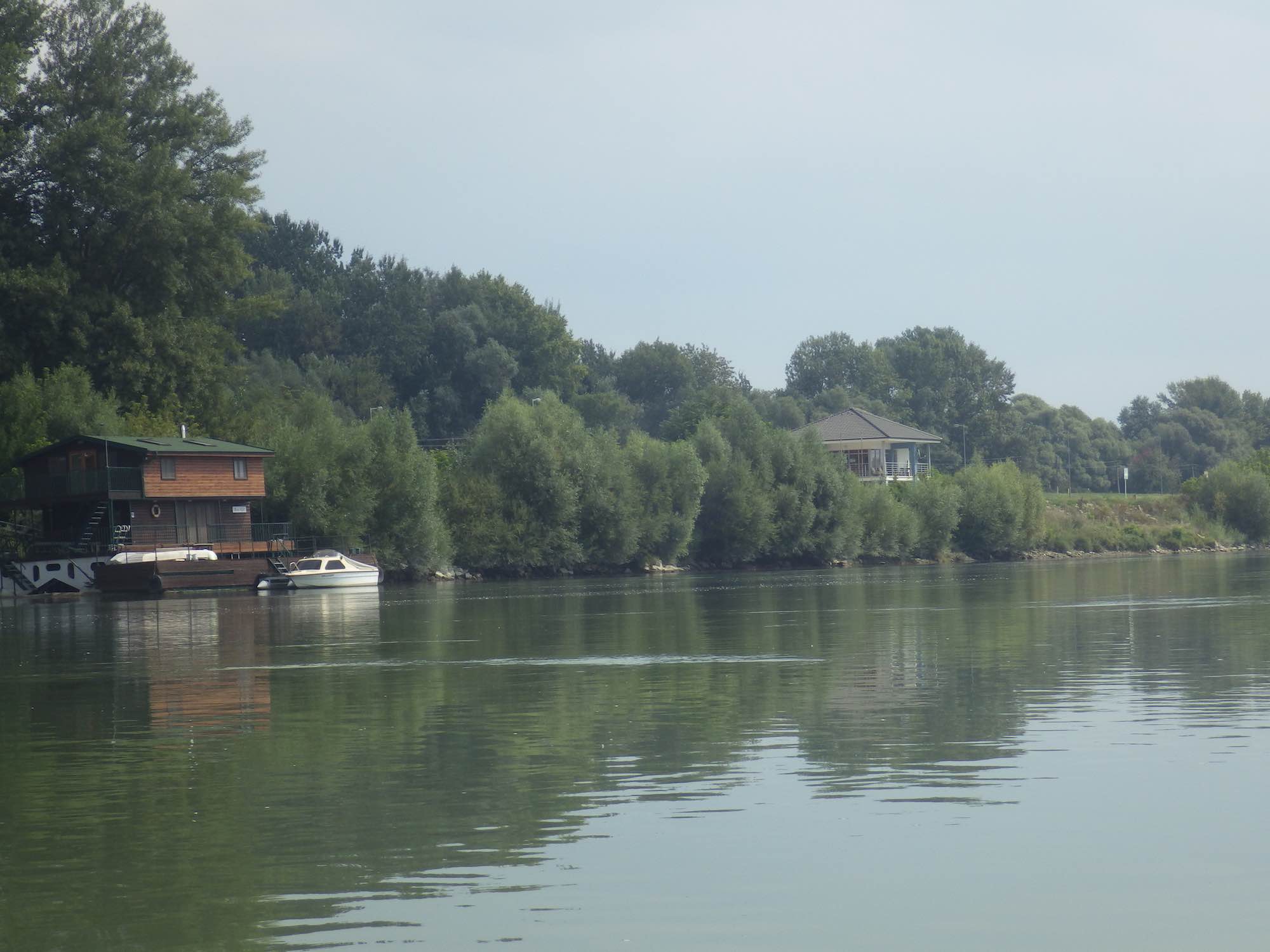 Our next checkpoint was the Hulam Csarda where we wanted to have lunch. We planned this at 1 pm and it happened in exactly expected time. I remember it very well because I was counting down every minute. A strong wind, slow Danube, almost 100 km paddling behind us and hunger could not be fooled easily. Csarda was closed. Very sad, we went on to look for a place where to cook lunch. The second csarda was a hundred meters behind the first csarda. Opened. Actually, this was the Hulam Csarda. There was a better choice of fishes to eat. Trout, carp, catfish, hake and also some smaller unidentified fishes. After lunch, we went on to catch up on the lost time. I do not know if it was lunch or recovery, but I felt full of energy again. Next to csarda there was a large colony of cormorants. After I disturbed the colony, they circled over our heads and waited until we would be far away. Then they landed on their favorite island. 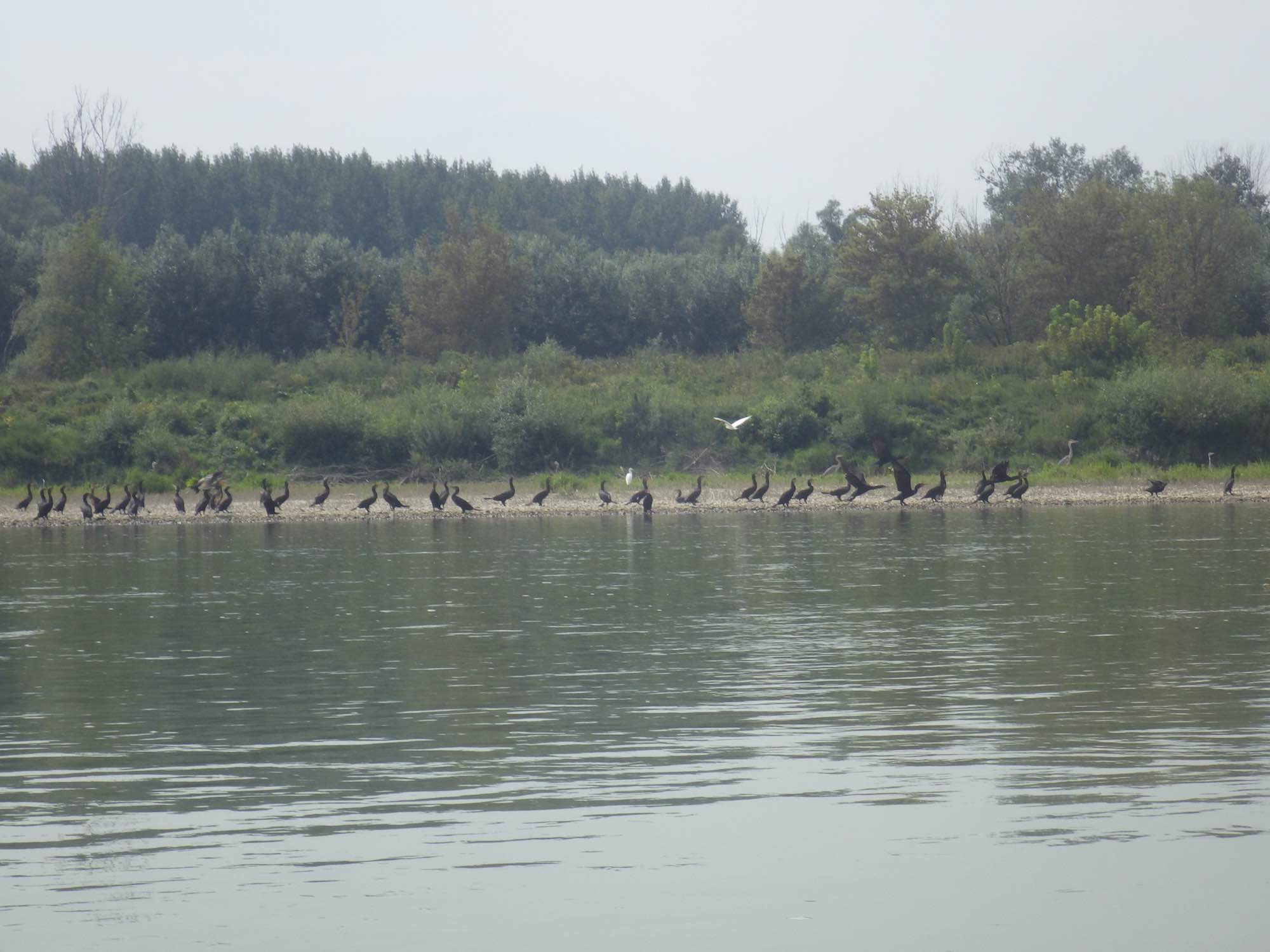 After that, we were very lucky. We saw a couple of sea eagles. We disturbed them while they were eating a caught fish on the gravel beach. As we were coming closer to the eagles, they jumped and moved to the island. When I was trying to film the eagles, a motor boat which was passing by scared them out. It was a big shame because it was the only one boat today. The eagles took off to the high altitude, circled over us and then got lost in the floodplain forest. It was a pleasant experience. It is our biggest prey. Their wingspread is over 2.5 meters. More than a golden eagle. Moreover, they were so close to us. 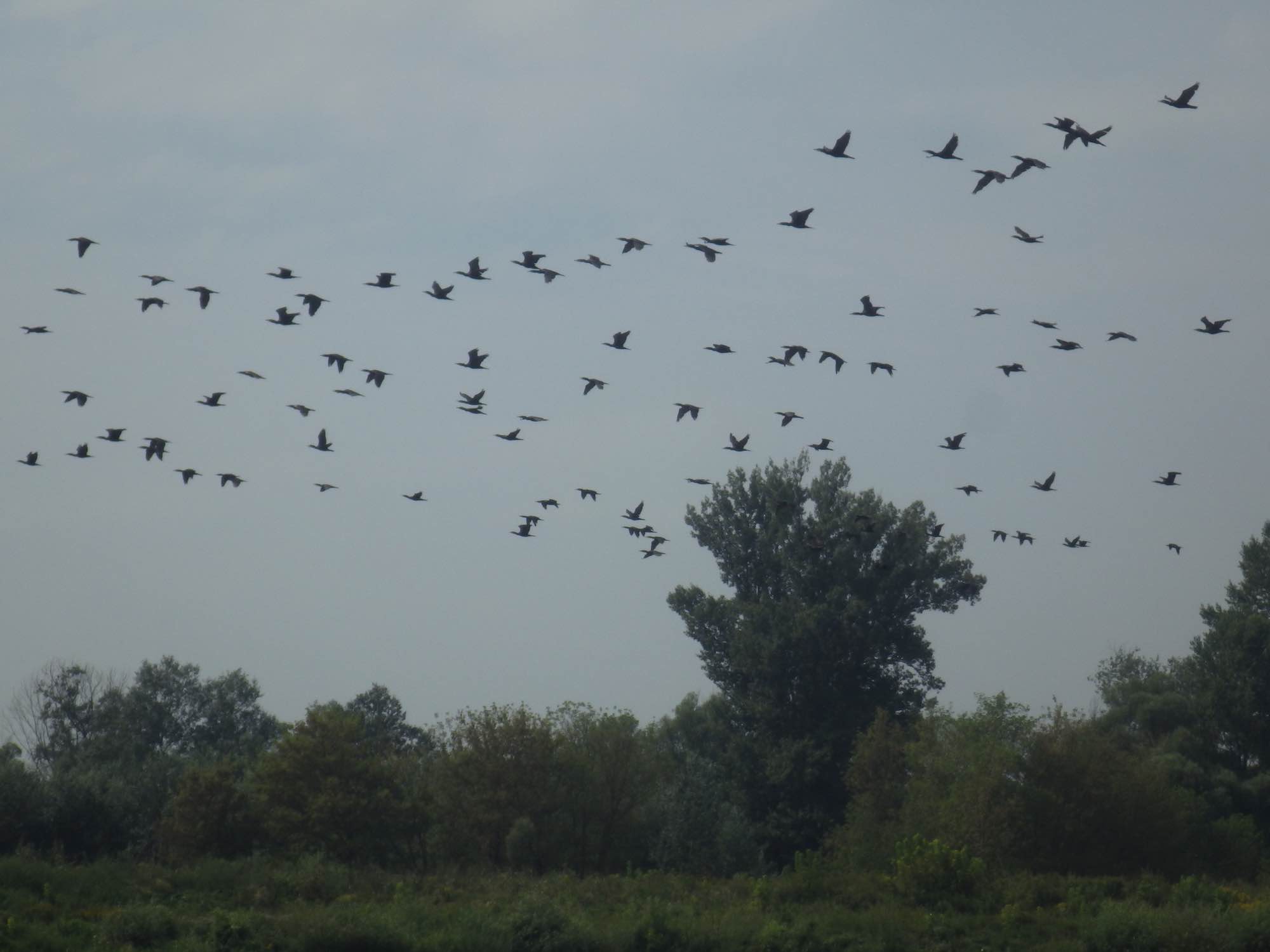 We finally came to the confluence of the old Danube riverbed and an artificial waterway. The Danube flows faster there, so we moved like a charm. The river signs signalized that we were approaching the planned campground. We still had a lot of time until the sunset and so we went on. There are never ending sand and gravel beaches around us. I was trying to ask captains of the ships to blown the ship horn. No success. The only one who used the horn was the captain of the Twin City Liner ship. He did not like the fact that we were to close. Actually, it was warning siren and we felt like in a missile base before firing a nuclear weapon. The unpleasant situation was saved by ship travelers. They enjoyed an unusual event on their otherwise boring journey. Almost all of them went out and nodded their heads. 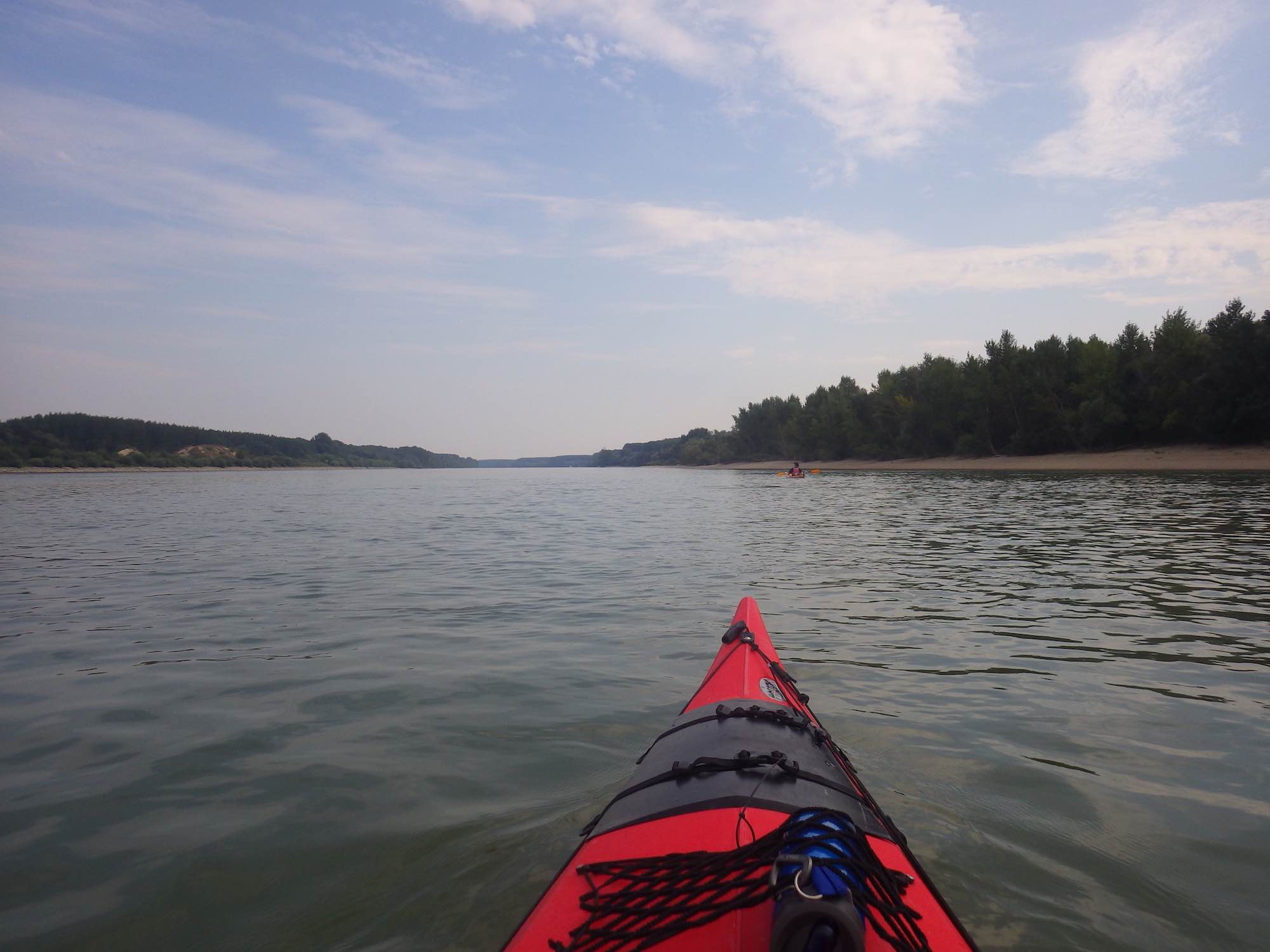 All nice places on the Slovak shore were occupied by fishermen, and so we camped on the Hungarian side of the river. The recent high water level created several little lakes. There were a big amount of flooded woods, so we made a truly Slovak bonfire.

In the morning we just poked ember and it went on burning. In the evening a fish jumped on the shore. We just smiled, we were after dinner. We helped the fish back to water. In the morning the water level was lower and in a few instances later the boat was touching buoys and adjusting the sailing way. It was very interesting because the Austrian red buoy next to the Karloveské rameno has been messing around since it tore off and sailed all the way to Bratislava. Moreover, since then there has been a tree attached to it and it is very difficult to avoid it. The boat was on fire, we met it once more in Komárno. 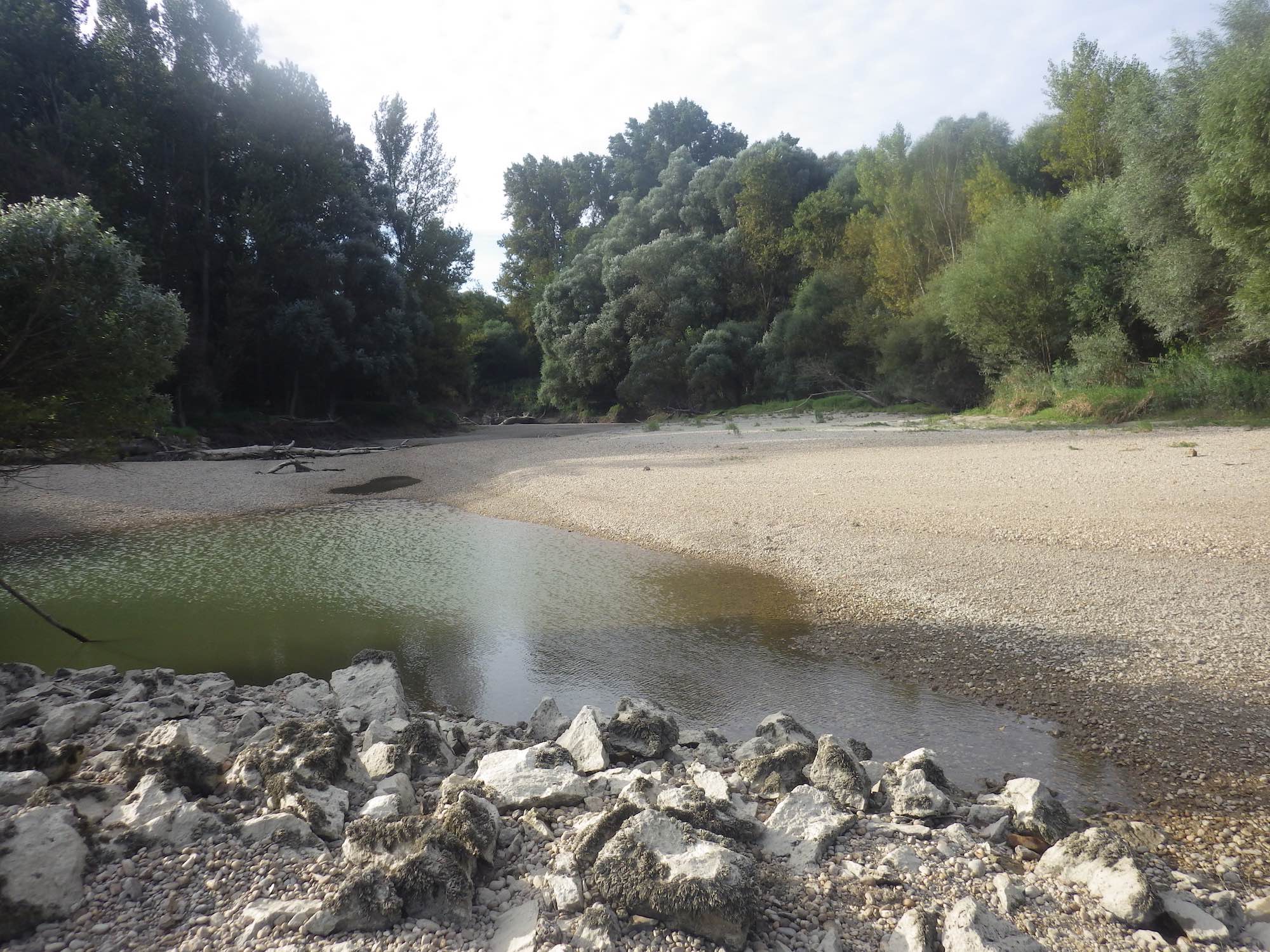 IT humour: The biggest switches I have ever seen. Additionally with water cooling. 803.2ad. 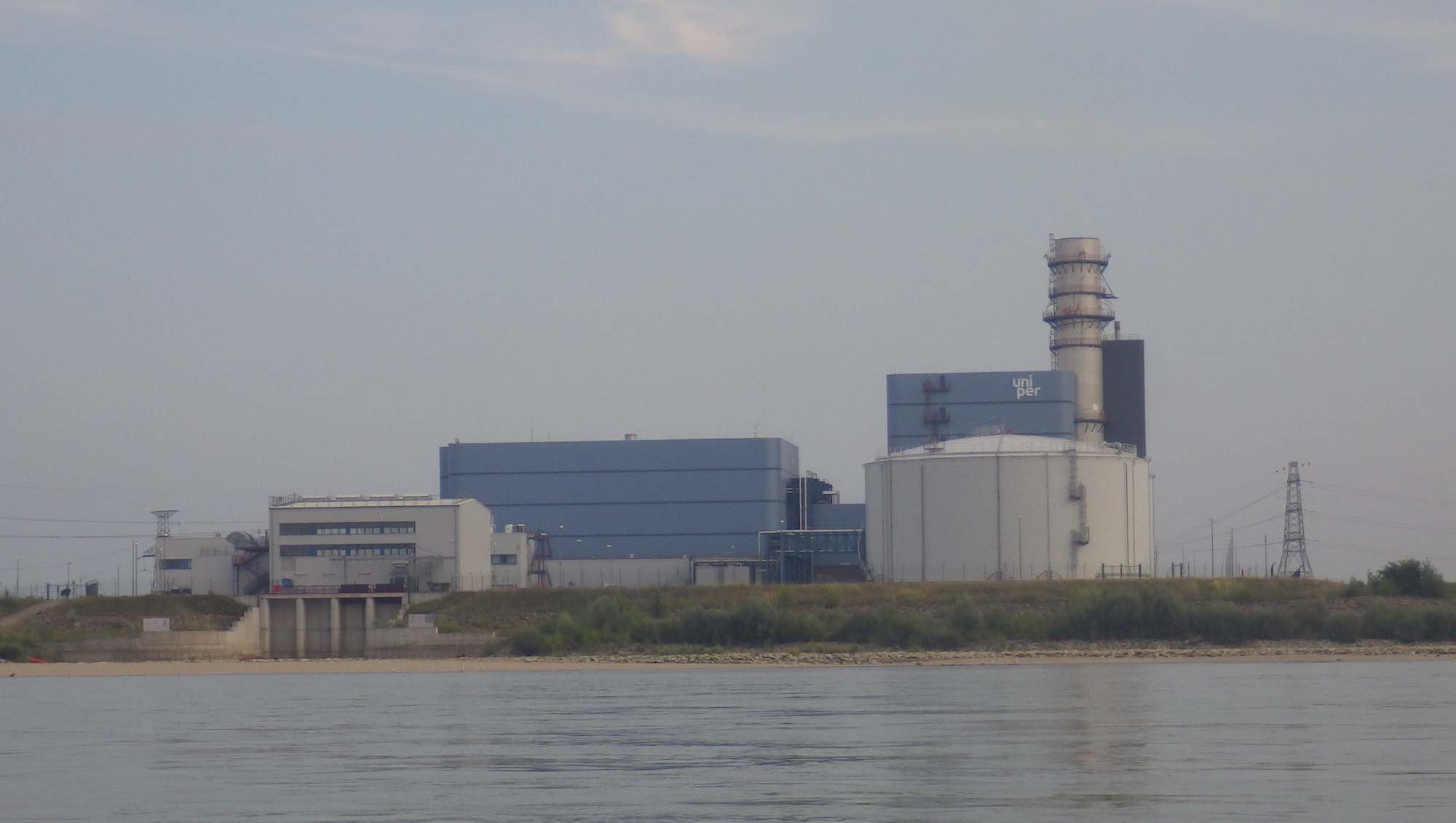 This Hungarian fortress (Monoštorská pevnosť) is the biggest construction complex of the Fortification System of Komárno and the biggest modern fort in Central Europe. It was scorching hot around noon, so I put on the coat - a 50 sunblock. 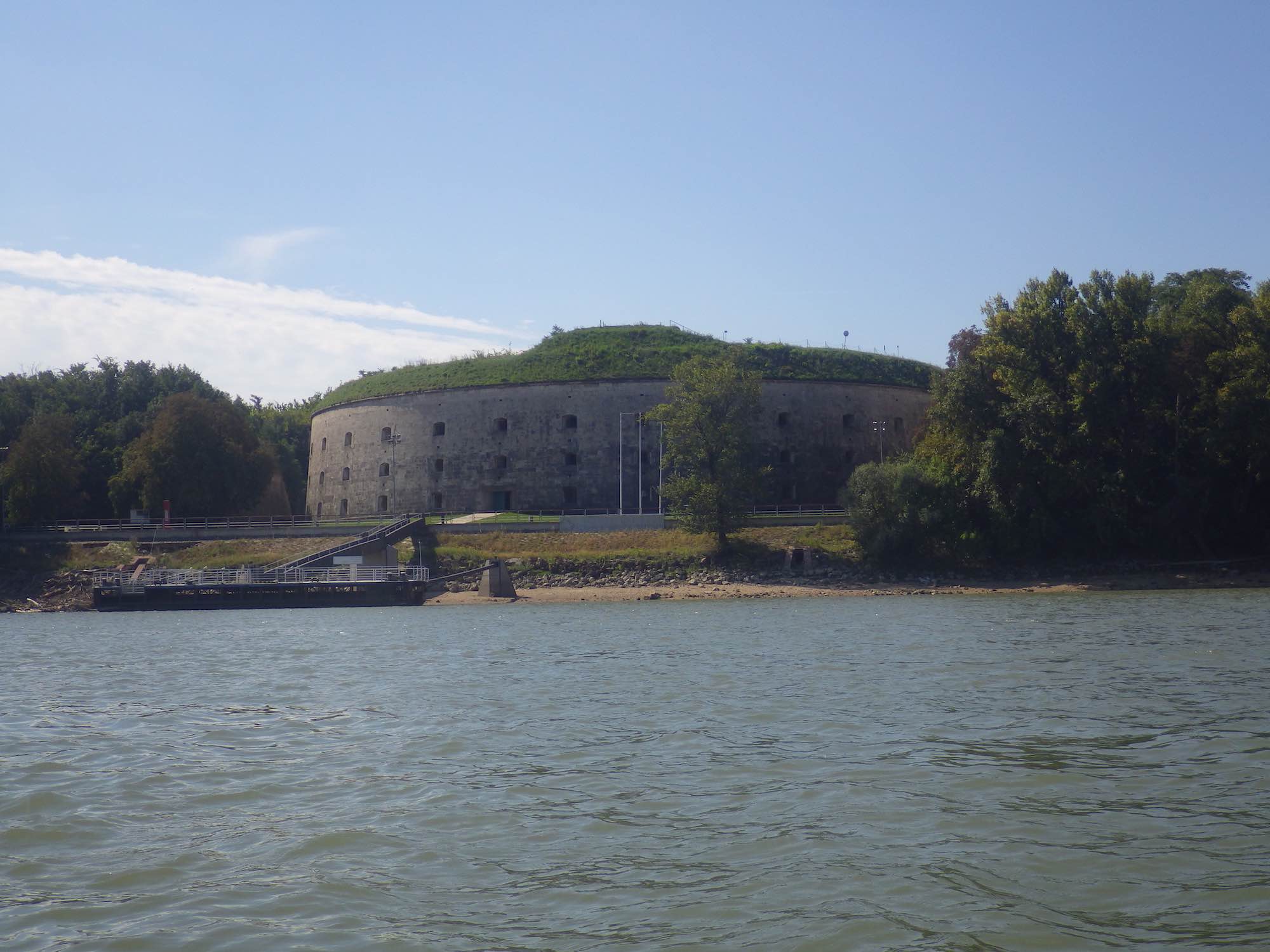 Never ending beaches, hot weather, sunshine, waves, sand, mussels. Does it remind you of something? 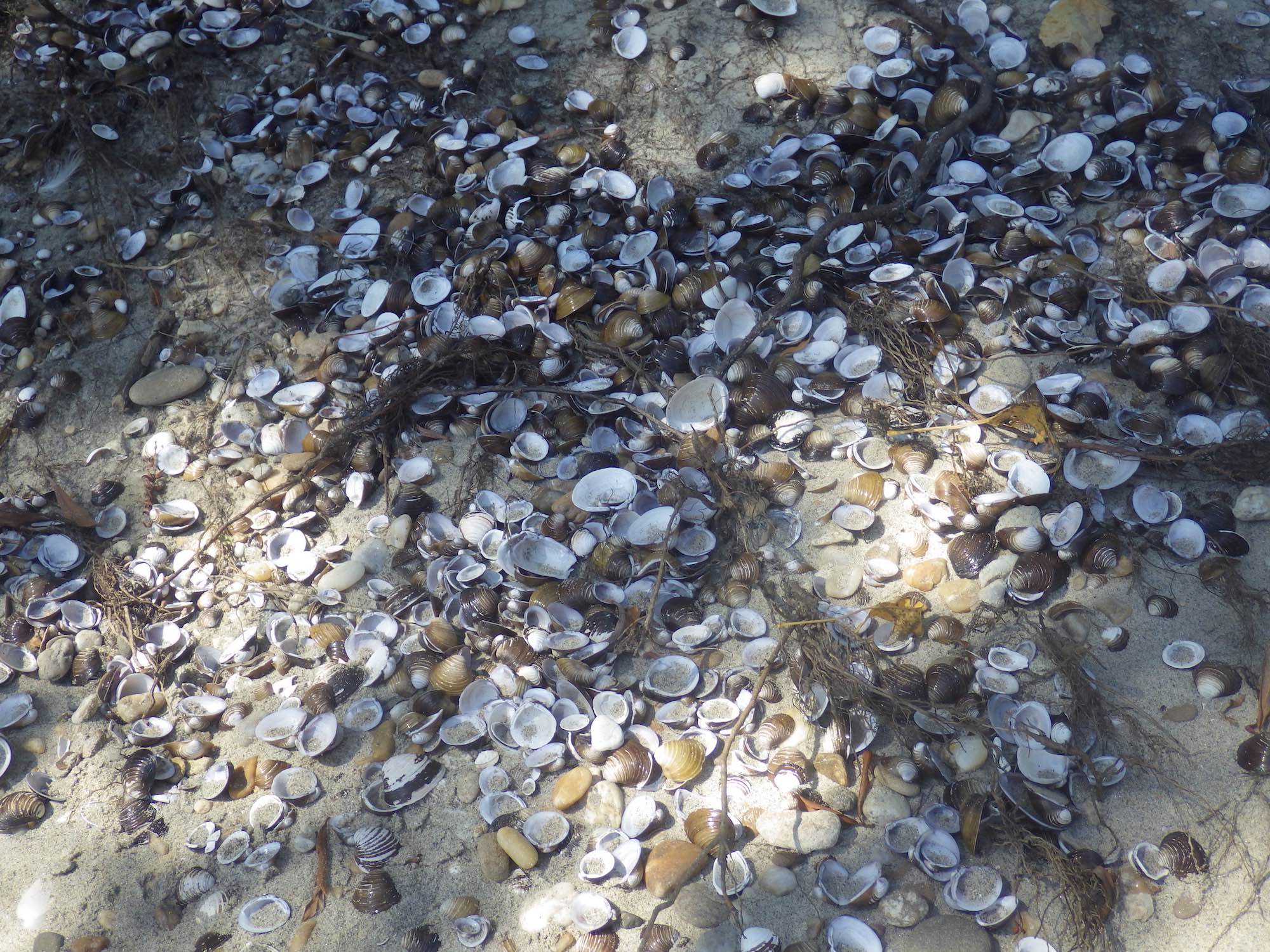 We finally reached the Moca csarda. Based on our previous experience, we are having double meals. It was just the beginning. The prices are different to other csardas, they are more like in Bratislava restaurants. It is all the same. 3 euros for water with lemon zest. When we asked them for water, the lady sent us to the dog aviary with a tube we could use. A pit bull was happy and let me take some water while a small dog was jumping. We were planning to stay here overnight but we set off instead. Even though we could continue longer, we decided to camp before reaching Sturovo. I remember a terrible smell of oil and beaches full of trash and glass. 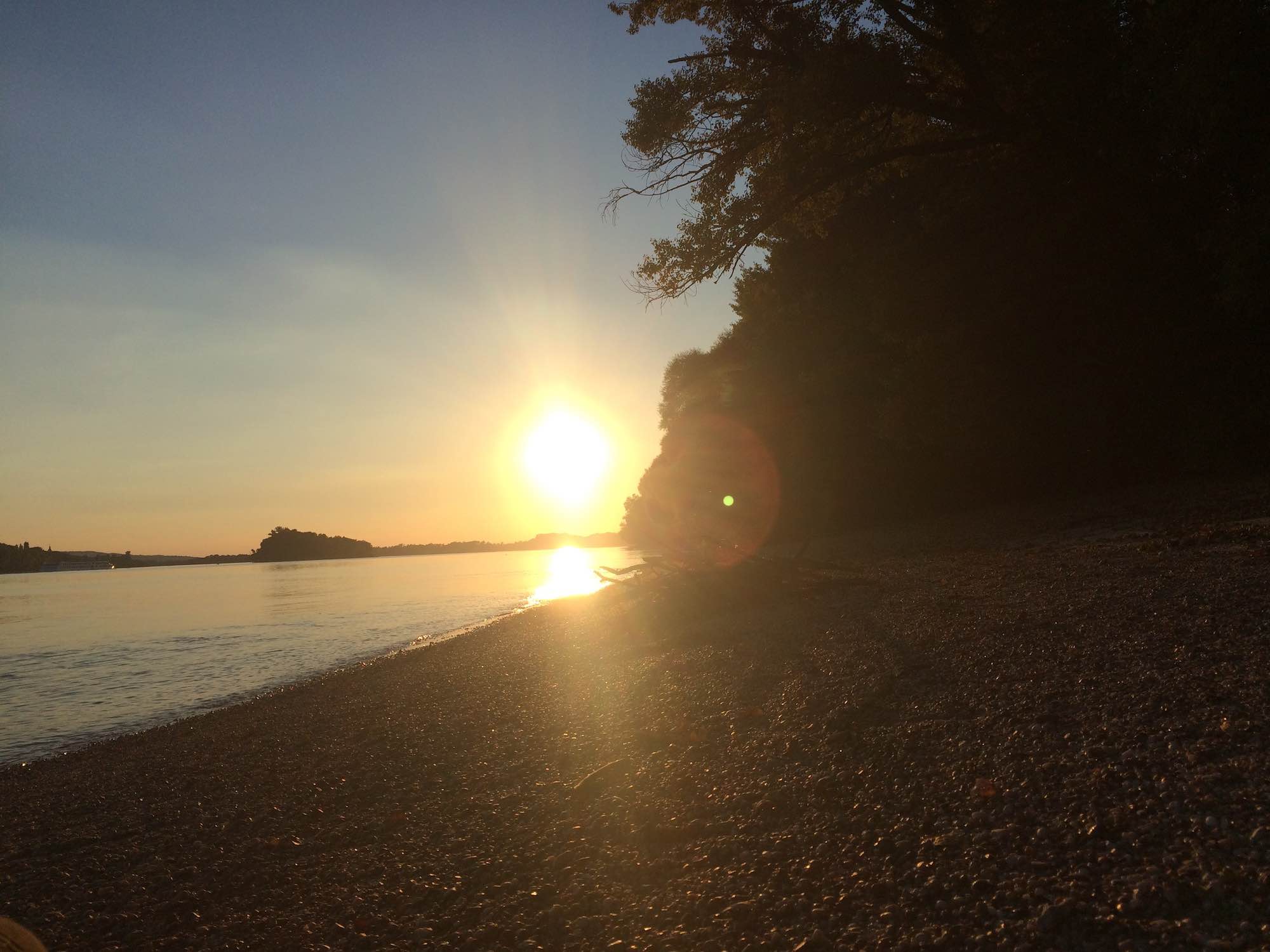 The atmosphere of camping was completed by the flock of crows, which went to find a place to sleep after sunset. I was a little bit scared they would sleep with us. On the one hand, I saw the Alfred Hitchcock movie The Birds, and, on the other hand, we would not probably sleep well.

At about 3 at night I woke up. Everything hurt me. Joints, muscles, head, stomach. I could not sleep on. Minutes after, everything went out-to the last drop. I woke up my buddy, who immediately ran out of a tent with a knife in his hand wondering what was going on. I managed to sleep for a little while, though. I could not lie nor sit. At dawn another unpleasant thing happened. They probably opened the dam and out of the blue there was a huge wave. I had water all over my body. Luckily, a sleeping bag did not let water in and stayed dry even though there was sand all over it. Some things were flooded and eventually dried out next to the boats. Fortunately, we grabbed and saved the boats. I tried to sleep higher and recover a little bit. The water was very high. These situations cannot be underestimated. However, this beach was well sloped. In the morning I was so weak I hardly packed my things. We were only a few kilometers away from Sturovo. If my buddy had not been with me, I would have hardly got there, though. I had a shiver in spite of the fact it was 30 in the shadow. I was in a terrible pain. In Sturovo we were waiting for our transfer back home. We had a nice view of the Cathedral of Our Lady of the Assumption and the Saint Adalbert Cathedral. We parked under the Mary Valery bridge. The bridge connects Sturovo with the Primate-island in Ostrihom. It is one of the biggest churches in the world. The biggest in Hungary. I was sleeping all the way home. After unpacking I slept on until the next morning. I woke up completely fit. 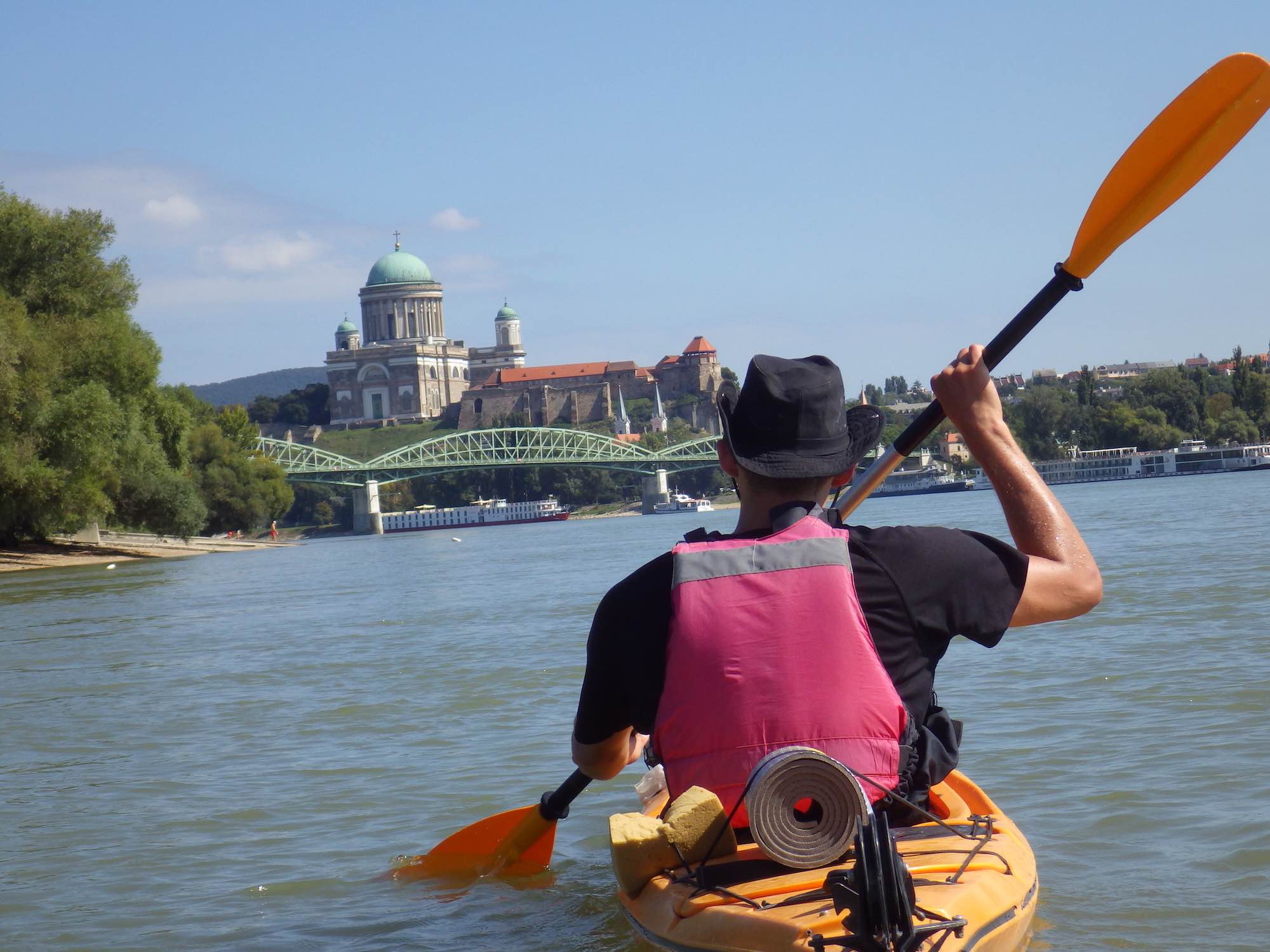 For now, Budapest stayed unconquered. I will not give up. When the opportunity comes up I will continue. Will you join me?